While the fickle frauds of world finance breath easy for the moment – having rid themselves of Mr. Papandreous of Greece and Mr. Berlusconi of Italy so they can safely get on with saving the big banks of Europe on the backs of the little people – thousands of Missourians have gone deer hunting.

Are the two related?  Indirectly, I think they are.  As the western governments seek ever more creative way to save their fannies and the global financial system by pushing austerity onto their populations, more people find it difficult to make ends meet, especially when it comes to food and energy costs.  And, as the world continues to slide down the bumpy backside of peak oil, this will only get worse.  Right now, around forty-six million Americans receive food stamps and millions more get at least part of their monthly food supply from food banks around the country.  As the Empire and its allies rush wantonly toward the brick wall of collapse, our own leaders seem willing to do anything to save the global financial system and the 800+ military bases around the world that support it.  That includes whacking away at food stamps and other social safety net programs that keep those millions of Americans from going hungry and homeless.

Which brings us back to those Missouri deer hunters.  Wandering around on the doomer forums, as I occasionally do, I find many doomers expect, as things go downhill, those hungry hoards will sweep out of the cities and towns to decimate wildlife and perhaps our own food supplies across the land in their pursuit of something to eat.  I tend to disagree, albeit conditionally.

First of all, many of these newcomers to the wild will have expended most of their energy just getting there (wherever there is). They will be in much more danger of getting lost and succumbing to hunger or of shooting each other than of actually killing off the local wildlife or inhabitants.  Secondly, even the most seasoned hunter has at least one story of spending a cold November day, week, or possibly the entire season without getting that wily deer.  What I’m saying is that hunting is harder than it looks in the television shows and magazine ads.  It takes craft and patience and, sometimes, out-thinking the object of your pursuit – qualities that might be in short supply in desperate, starving people.

So, what will happen to these hungry hoards when things go terribly awry?  I hate to sound like a broken record, but that depends on us.  On our attitudes (you might want to re-read Luke 10:25-37 if you need an attitude adjustment from the Universe on who qualifies as a neighbor), how creative we can be in the care and share department, and so forth.

When Occupy SpringfieldMO had its first protest march, they asked everyone who participated to bring a non-perishable food item and the protesters marched over to the Kitchen – a local, non-profit that works with the poor – and donated the food they’d gathered to the food program there.  Many local gardeners plant extra vegetables to take to the food banks. 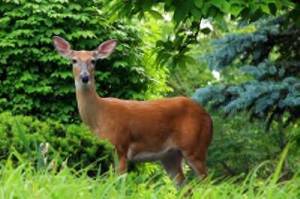 Local churches, social groups and businesses frequently give foodstuff or have food drives – especially during the holiday season – to help restock local food banks.  I’m sure other towns and cities do the same.

But what really got me to thinking about this again was a story on the local news about Share the Harvest, http://ozarksfirst.com/fulltext?nxd_id=551387 a program organized by the Missouri Department of Conservation that has run for the last twenty deer-hunting seasons. Deer hunters can donate part or all of their deer to help feed the hungry when they take it in to be butchered and processed.  Last year, the Share the Harvest program brought in more than 6,100 deer resulting in 350,000 pounds of venison that was distributed after processing to thousands of needy families through the various regional food harvest programs around the state.  That’s a lot of meat protein for hungry people.

I’m sure Missouri isn’t the only state to have such programs.  If you’re concerned about what will happen as Federal programs disappear and the burden becomes ever more local, check and see if your state has a similar program.  If they don’t, bring it to the attention of your Conservation Department.  Here’s how Missouri’s program is set up. http://mdc.mo.gov/hunting-trapping/deer/share-harvest  And there’s no reason, as states find it harder to maintain such programs, regional and local groups couldn’t set up similar programs.   In our fear of the unknown, we sometimes tend to forget or underestimate the power of collective actions.

None of us really wants to live in a dog-eat-dog, Mad Max world.  (Okay, maybe there are a few of you macho monkey men who think it would be “so cool”.  Get over it.)  But, if we want to survive, even thrive, as things get tougher, we’re going to have to be creative.  We’re going to have to work together and give people who got lost in the shuffle a chance to adapt to the new realities.

None of us can feed America, but each of us, working together, can help feed our neighbors.

6 Responses to Feeding Your Neighbor